A switching regression model is used to either classify unobservable states or to estimate the transition probabilities for these unobservable states in a time series. It can be considered as a clustering algorithm for time series, which gives you the estimated equation for each cluster and the probability that the time series falls into that cluster at the given point in time. A switching regression can be applied in any business area where you have a time series, and has already been successfully applied by economists to analyze the business cycles, by mutual fund managers in assessing mutual funds and by investment bankers to evaluate stock returns.

I will explain you on the basis of an example what a switching regression can do. A time series is a collection of data where you followed an individual over a longer period of time and recorded specific variables at several points on time. A simple time series is for instance is the price of gold on the stock market. Here you can see the development of the gold price from 1995 until today.

When you look at the figure, you will realize that fitting a simple linear regression might not be a good idea, because the time series does not grow in a straight line. Ideally, you would hypothesize that the first part until approximately 1970 would fit to a rather very flat regression line, the parts from 1970 until 1983 and from 2000 until 2015 to a steeply increasing regression line, the part from 1983 until 2000 to a mildly decreasing regression line. A switching regression model would help you first to identify, how many different unobservable phases are there, what are their estimated equations, how does the influence of certain variable differ depending on the state, and what is the probability that the time series is in any of the different phases at any point in time. Here is the example, what states a switching regression model would identify for the gold price time series:

Business Area & Impact: Find the unobservable in your time series

A switching regression analysis can be practically applied any field, where you want to analyze different unobservable states in time series. It has been already successfully applied in the area of finance and economics to understand business cycles, asset allocation, stock returns, interest rates, portfolio management, and exchange rates. However, the also other possible application in various areas. Here are a few examples:

In general, you should consider using a switching regression model for the following five purposes:

First of all, I need to upload the data and make sure that all the variables have the right data type. In this case, when you upload the data set, you will see that the variable Date is still a character. Therefore, I will convert it to a Date-type using the function as.Date().

In the second step, you will need to decide on the number of states that you expect. In the context of switching regressions and Markov processes, you usually say regimes instead of states. However, I will continue using the word states. Your decision on the number of states should be theory-driven. That means that you have a clear theory how many states should be possible and how many states you want to estimate. If you analyze a stock, you might expect only two states: the stock goes up or goes down. Therefore, you would assume only two hidden states. Now let’s have look at our example:

In our example, I expect three different hidden states. The first one is a stagnating state, the second one is a sharply increasing state that we can observe after 2000, and a volatile stagnating state that we can mostly observe before 2000. Therefore, I assume that there should be three different states. Keep in mind, that you do not want to specify too many states for two reasons. First, the more states you have the more complex the interpretation gets. Second, the estimation of a switching regression model is computationally complex, which means the more data you have and the more states you have, the longer your it will take to compute it.

Since I have an economic background, here my small question to you. Why was the price of Gold so stable until 1970 (there is a pretty logical explanation ;))?

At this point, I should mention that there are various types of markov-switching regression models, where each type has its advantages and disadvantages. You can basically apply all statistical tools you know from time series. Here two examles:

We can interprete a switching regression models in two ways, first by looking at the coefficients and secondly graphically.

Looking at the coefficients

The code will give use the following results:

You will realize, that it will give us a different equation for each state.

There you see now, that none of the regimes has a negative estimate. Apparently, the price of gold has been increasing through all three states it would go through. The effect size is the highest in State 2, therefore this states will probably represent an extreme growth. State 3 has a more moderate effect size, therefore it makes sense to name state 3 moderate growth. Finally, state 1 has the lowest effect size, so I would suggest to name it slow growth. In your further analysis, it might be interesting to include further independent variables to see for instance, how much they were the driver behind the growth in each phase.

Another thing we can look at are the transition probabilities, which are summarized at the very bottom of the output.

What you will see is that the states are pretty stable, which means that the underlying states change rarely over a period of a month. Furthermore, you will see that the transition probabilities for switching to the first “moderate growth” state are generally higher than for any other. Of course you can go in greater depth in your analysis, but I will leave that to you.

Looking at the graphs

When we are looking at the upper figure, we can see that this state most likely describes the one of slow growth. The probabilities also seem to be very clear with little chance for misinterpretation.

The second regime apparently is the high-growth one or the one with the highest volatility, as the gold price increases rapidly, peaks, and then it falls down to a little higher price than it was before it started to soar. Only the increase around 200 has a lower probability as it looks as this part does not necessarily fit that well into this state.

Finally, the third state seems to be the one of moderate growth. Also here the probabilities are not that clear for the one cluster around 200. Regardless of that, it looks relatively reasonable. I will not dug deeper into the interpretation here as well. I will leave that you.

Hamilton, J. D. 1989. A new approach to the economic analysis of nonstationary time series and the business cycle. Econometrica 57: 357–384. 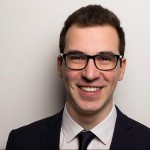 I am passionate about telling tales that come from analytics and data. Developing and later on telling the story is the way you make sense of the data. However, you need to be careful to narrate the right story and connect the pieces of the riddle step by step like Sherlock Holmes. This is what Economalytics is about.